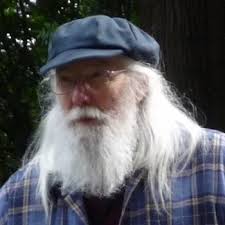 Hello to All, On the morning of December 14th, I got the sad news that my close friend, Don “Father Time” Crabtree, had passed. The EV racing world has lost one of our most unique pioneers. Whether leading NEDRA through tough times, teaching us new tricks, amazing us with his creativity, or simply being a good friend in very dark times – Don “Father Time” Crabtree never let us down, and when it mattered most to me, he didn’t let me down either. I have circulated a picture I took of him from a few years ago – the two of us were out on my back deck running ideas back and forth and we so often did – I think my daughter’s response pretty much sums up how we felt about him, “Thanks for the picture Dad, it is nice to remember our long time family friend.”

I can say with absolute certainty, Don “Father Time” Crabtree was one of a kind – an off-the-wall, crazy dude who was at the same time, brilliant! To be honest, nothing was normal about him, that’s why we all loved him so much! Our first meeting is a perfect example of Don’s unique style. It was an electric hydro meet at Silver Lake, Washington in the mid-nineties, where I met up with Rich Rudman (another zany guy) to be introduced to the man who would forever after, be known as Father Time and become both an inspiration and dear friend. It was a treat to see the electric hydros run, but I was there to meet this fellow I’d heard so much about. I was asking where he was, when I heard “Oh, here he comes now”(pointing to the lake). I am looking at a scene from ‘The Creature from the Black Lagoon’ as this long-haired bearded man is walking (not swimming) out from his submersion in the water. From my first grasp of his wet hand, we bonded as if we’d known each other forever. In fairness, I suppose it felt that way to all he encountered… that was Father Time. Drying off on that warm day, his long flowing white hair and sweeping beard made me think I was hanging with a reject from ZZ Top! I was taken to the back of his hydro tow rig that was filled with a collection of lead batteries connected in series at high voltage, where he proceeded to spark-together a Crabtree-crafted mating device that ‘dump-charged’ his already over-heated boat batteries in minutes! Who was this guy?

Don “Father Time” Crabtree was, as Dave Cloud put it, ‘a great thinker’ – always scheming up new creations and different ways of doing things. I suppose he and Steve Jobs would have gotten along just fine. Ordinary was boring, tried and true was usually avoided, but taking his own path resulted in some of the most magical electric creations the EV world has ever seen! At an early NEDRA EVent, he showed up with his ‘FrankenBike’, a rad-looking raked motorcycle with a huge meat on back, over-stressed lead acid batteries, an electric motor he had massaged, and with a very special center piece – a 500 amp analog panel meter with a bent needle from hard-pegging too many times! Another amazing electric motorcycle FT created was ‘Dragon Parade’ with its twin battery packs that were reminiscent of the Enterprise’s warp drive engines.

With a machinist background tempered by his love of modern art, the metal pieces on his wacky but oh-so-cool machines would have been at home in a museum. I was always filled with excitement and ready to be amazed when Don “Father Time” Crabtree and his wife Jessica – aka ‘The Time Keeper’, were scheduled for a visit to the Wayland home. One time he unloaded a wonderful ultra light three-wheeled moped / electric contraption he made, with a wide bench seat constructed from a pair of aluminum and stretched strips of vinyl patio chairs. With twin pedal sets we moved away and got up to a good clip, then he hit the electric assist and away we glided up to beard-blowing speeds! It wasn’t long before we had a line formed at my house of neighbors and passer-byes who wanted to get in on the fun – getting in on the ‘fun’, is what FT was all about! In fact, I had a major battery exec at my home to check out the Zombie, but all he wanted to do was ride in Don’s elegant trike and talk with the crazy character he had just met 🙂

Electric Legend cars, chopped and narrowed drag cars with twin monster motors, electric hydros, electric drag motorcycles, vanilla daily drivers, and even motorized furniture were all designed, hand-crafted and pushed to limits by this nut case! In recent years he was clocked approaching 50 mph on his electric LazyBoy! Fantasticly artful while pushing some kind of boundary, it was mind boggling to see what emerged from his cramped and cluttered backyard garage. Inside, it was strewn with tortured motors who’s commutators looked more like copper mushrooms, metal shrapnel that was once some electrical device, fractured gears, melted cables – all around was evidence that this guy played on the edge!

Over the near two decades I hung with Don “Father Time” Crabtree, he was always featured on the many videos, TV shows, and news casts about anything EV. It went like this…film crews and reporters from all around the world were arriving in town to meet the renegade AmpHeads breaking all the stereotypes about stodgy EVs. It never failed, much like a magnet pulling at ferrous metal, they’d look over at FT with his snow-white long hair and wild beard, wrenches flying and sparks snapping while doing last minute wizardry on one of his creations, with a look on their faces of ‘What the hell?’… usually followed with, “Who’s that?” Roderick Wilde has already written about the German video where Don’s powerful drag bike took off and slammed into a big Lincoln Town Car… I was there when it happened. After the accidental full power launch and the impact that sent him over the handlebars, as he un-crumpled himself FT immediately quipped to the videographer, “Did you get that?” I remember the camera man looking over at me, absolutely stunned and astonished at the old fart who shrugged it off as just another day at the laboratory! A few weeks later at a Woodburn drag race Event, there he was in shorts, tie-dyed shirt and suspenders, with his bandaged, bruised and scabbed-up leg looking like a survivor of a brutal street brawl – our poster child for all things bizarre and demented 🙂

Then there were those l-o-n-g road trips to far away racing Events with Don and company – man, too many stories to tell! Whatever went sideways, got screwed up, or otherwise freaked us out – it never fazed FT – never! In fact, he liked it! The odder it was, the scarier it got, the more insane it became – it all just fueled him. I used to get grilled by ‘The Time Keeper’ when we’d prepare to go off on a road trip, “Do your best to keep him out of trouble.”

It’s already been reported that Don “Father Time” Crabtree was a big fan of the Douglas Adams series ‘Hitchhikers Guide to the Galaxy’, and I too, knew this well. I’m fairly convinced that FT really did think the earth was a supercomputer commissioned and paid for by a race of “hyper-intelligent,” “pan-dimensional” beings. Maybe he was actually one of them? In any Event, he’s no longer in this dimension, or at least it appears that way…

I’ll miss you, my friend!